Hānshān Déqīng (憨山德清 1546–1623), was a leading Buddhist monk and poet of Ming Dynasty China who widely propagated the teachings of Chán and Pure Land Buddhism.

According to his autobiography, Hanshan Deqing entered a monastic school in Nanjing’s Bao’en temple at the age of twelve. While there he studied literature as well as religious subjects and began writing poetry when he was 17. Two years later he was ordained as a Chan monk under the Buddhist name of Cheng Yin. When the monastery burned down in 1566, he busied himself for some years in keeping the community together and raising money for repairs. Then in 1571 he set out as a religious wanderer, going from monastery to monastery in search of instruction and growing in meditative attainment. After four years he settled on Mount Wutai but by 1583 he had become famous as a Buddhist Master and set out travelling to remote areas again. It was at this time that he prefixed his name with that of Hanshan Peak so as to return to anonymity. 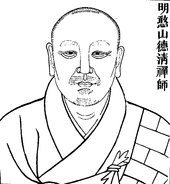 In consequence of having organized a successful ceremony to ensure the birth of a male heir to the throne while he was still at Mount Wutai, Hanshan obtained the patronage of the emperor’s mother. With her support he was able eventually to establish a new monastery at Mount Lao on the coast of the Shandong Peninsula. But when relations between the Wanli Emperor and his mother broke down over the choice of heir, Hanshan was caught in a conflict which also included tensions between Daoists and Buddhists. In 1595, he was put on trial and imprisoned, then afterwards exiled to the Guangdong area. While there, he made himself socially useful and also helped restore Nanhua Temple at Caoxi which, since the time that Huineng was entombed there, had been converted into a meat market. Some of the monks at the temple made a false accusation of embezzlement of the restoration funds against him and, though he was acquitted, he did not return there.

Between 1611-22 Hanshan resumed his wanderings from monastery to monastery and also continued writing the religious expositions and commentaries he had begun during his exile. Shortly before his death in 1623 he returned south to Caoxi, where his body was eventually enshrined.

Hanshan Deqing is regarded as one of the great reformers of Chinese Buddhism during the later Ming Dynasty, renowned as a lecturer and commentator and admired for his strict adherence to the precepts. Like many of his contemporaries, he advocated the dual practice of the Chán and Pure Land methods and advocated the use of the niànfó (念佛) technique to purify the mind for the attainment of self-realization. He also directed practitioners in the use of mantras, as well as scripture reading.

Regarding the use of meditation subjects, or gōng’àn (公案; Jp. koan), Deqing taught:

This method is not meant for you to think about the meaning of a gong-an as if the gong-an were a question for intellectual solution. Speaking of the hua-tou method, Dahui taught his disciples to kill the “sneaky mind” with a cold-blooded hand.

According to Jiang Wu, for Chan masters such as Hanshan Deqing, training through self-cultivation was encouraged, while clichéd or formulaic instructions were despised. Eminent monks who practiced meditation and asceticism without proper Dharma transmission were acclaimed as acquiring “wisdom without teacher.” Jiang Wu writes that Deqing questioned the value of Dharma transmission and believed that the enlightenment of the mind was more important than nominal claims of transmission. 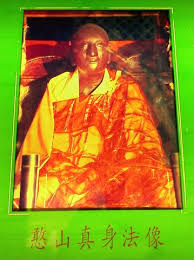 Hanshan Deqing’s poetry is also made an instrument of religious instruction through the use of an elegant and accessible style. It spans from the long doctrinal reflection “Contemplating Mind” to antithetical quatrains composed of balanced couplets:

When the bow’s stiff, its string is first to snap;
The sharper a blade is, the easier to chip.
Trouble results from a talkative tongue,
Harmful deeds reflect a hardened heart.

Several of these poems describe the experience of meditation in the hard conditions of a mountain hermitage; others are moral in tone, counselling an attitude of acceptance and the way to social and inner harmony.

In addition, Hanshan was author of numerous discourses and commentaries.

The Filial Piety Sutra: The Sutra About the Deep Kindness of Parents and the Difficulty of Repaying it

The Dancing Peacock: Pride and Modesty