Zen (禪; pinyin: Chán) is a school of Mahayana Buddhism that originated in China during the Tang dynasty as Chan Buddhism. Zen school was strongly influenced by Taoism and developed as a distinguished school of Chinese Buddhism. From China, Chan Buddhism spread south to Vietnam, northeast to Korea and east to Japan, where it became known as Japanese Zen.

Traditionally the origin of Chán in China is credited to Bodhidharma, an Indian monk. The story of his life, and of the Six Patriarchs, was constructed during the Tang Dynasty to lend credibility to the growing Chán-school. 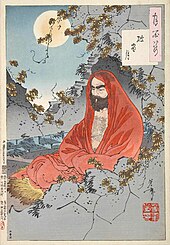 Bodhidharma is recorded as having come into China during the time of Southern and Northern Dynasties to teach a “special transmission outside scriptures” which “did not stand upon words”. Throughout Buddhist art, Bodhidharma is depicted as a rather ill-tempered, profusely bearded and wide-eyed barbarian. He is referred as “The Blue-Eyed Barbarian” in Chinese Chan texts. Only scarce historical information is available about him, but his hagiography developed when the Chan tradition grew stronger and gained prominence in the early 8th century. By this time a lineage of the six ancestral founders of Chán in China was developed. The short text Two Entrances and Four Acts, written by T’an-lín (曇林; 506–574), contains teachings which are attributed to Bodhidharma. The text is known from the Dunhuang-manuscripts.

Tánlín’s brief biography of the “Dharma Master” is found in his preface to the Long Scroll of the Treatise on the Two Entrances and Four Practices, a text traditionally attributed to Bodhidharma and the first text to identify him as South Indian:

“The Dharma Master was a South Indian of the Western Region. He was the third son of a great Indian king. His ambition lay in the Mahayana path, and so he put aside his white layman’s robe for the black robe of a monk … Lamenting the decline of the true teaching in the outlands, he subsequently crossed distant mountains and seas, traveling about propagating the teaching in Han and Wei.”

The Anthology of the Patriarchal Hall says that in 527, Bodhidharma visited Emperor Wu of Liang (蕭衍), a fervent patron of Buddhism:

In the late 8th century, under the influence of Huineng’s student Shenhui, the traditional form of this lineage had been established:

According to tradition, the sixth and last ancestral founder, Huineng (惠能; 638–713), was one of the giants of Chan history, and all surviving schools regard him as their ancestor. The dramatic story of Huineng’s life tells that there was a controversy over his claim to the title of patriarch. After being chosen by Hongren, the fifth ancestral founder, Huineng had to flee by night to Nanhua Temple in the south to avoid the wrath of Hongren’s jealous senior disciples.

It was Huineng who brought Chan Buddhism into blossom in China that later turned into various branches or schools.

During the Song Dynasty, the Five Houses of Chan, or five “schools”, were recognized. These were not originally regarded as “schools” or “sects”, but based on the various Chan-genealogies. Historically they have come to be understood as “schools”.

The Five Houses of Chan are:

Central to Zen is the practice of dhyana or meditation.

The Long Scroll of the Treatise on the Two Entrances and Four Practices written by Tan Lin (曇林; 506–574), contains teachings which are attributed to Bodhidharma.

The entrance of practice includes the following four increments:

Chan Buddhism is strongly influenced by Taoism. The first Buddhist recruits in China were Taoists. They developed high esteem for the newly introduced Buddhist meditational techniques, and blended them with Taoist meditation. Representatives of early Chinese Buddhism like Sengzhao and Tao Sheng were deeply influenced by the Taoist keystone works of Laozi and Zhuangzi. Against this background, especially the Taoist concept of naturalness was inherited by the early Chan disciples

Zen was not introduced to Japan as a separate school until the 12th century, when Myōan Eisai traveled to China and returned to establish a Linji lineage, which eventually perished. Decades later, Nanpo Shōmyō  (1235–1308) also studied Linji teachings in China before founding the Japanese Otokan lineage, the most influential and only surviving lineage of Rinzai in Japan. In 1215, Dōgen, a younger contemporary of Eisai’s, journeyed to China himself, where he became a disciple of the Caodong master Tiantong Rujing. After his return, Dōgen established the Sōtō school, the Japanese branch of Caodong.

The Filial Piety Sutra: The Sutra About the Deep Kindness of Parents and the Difficulty of Repaying it

The Dancing Peacock: Pride and Modesty